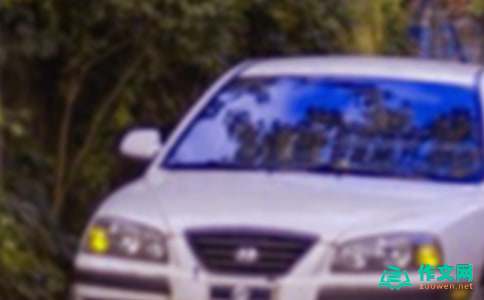 Private cars have entered Chinese families. More and more people drive to work in their own ears. And it seems a trend that all can possess a family car in the future.

But is it really good to have a car? Owning a car means spending time and money buying, learning to drive and repairing it. So you seem to pay a lot for a big trouble. Besides, if every family has a car, what will the road be like? Crowded? Jammed with... Oh, my God!

Family cars are intended to be convenient, but will it really bring convenience to the everyday life in a country with such a large population? Moreover, driving cars will very likely make people sit all the time without any exercises. It will do harm to the physical body. Comparatively, riding bicycles is mtIch better and economical. So,I think, it is not appropriate for China to popularize family cars in the near future, especially in our big densely-populated cities.

along with the economic growth, private cars have penetrated into a wealth of citizens’ lives because of its convenience features. undoubtedly, the widespread use of cars promotes the social productivity and enhances the economic development. but we are supposed to weigh strengths and weaknesses of the popularity of cars. with the growing prevalence of vehicles, a host of problems have emerged.

in the first place , car emissions are having an immeasurable effect on the world’s climate. solid scientific evidence can confirm this harm. second, because the car depends so heavily on fossil fuels, it is a major source of carbon dioxide that causes global warming. additionally, soaring ownership of cars puts tremendous pressure on the limited capacity of current transport system. there is a heavy urban traffic flow with frequent traffic jam. these harmful side effects of autos burden our society with unacceptable costs to human health, the environment, and our economy.

so we must reverse this rising trend and promote the mass transportation. our heavy reliance on private cars must be reduced.

In general, there are two way of traveling, private cars and public transportation.

Chinese people should regard public transportation as their first traveling opinion.

First, there are so many people living in this countries that make it so crowded.

If each chinese people own a car, there will be far more traffic jams and accidents, which increase you impatience.

Moreover, there will be far more pollution resulted from cars. Once a car started, it release huge amount of dirty gas and heat, which lead to great pollution and result in green house effect.

Since their coming into being, automobiles have been significantly contributing to human industries, agricultures, and even the daily lives.

It is automobiles that have been shaping and reflecting the ways humans work and think. They accelerate the sustainable economic development. They boost industries. They also catalyze scientific research.

But nobody can deny that automobiles have also exerted some unfavorable impacts on social and economic fabric. First of all, they have seriously polluted the environment in which humans survive. Secondly, traffic jam wastes lots of time. Finally, they also waste the money, especially in metropolis.

My opinion is that in the foreseeable future, scientists will be able to solve all problems. Exactly, human will eventually be able to minimize the harmful effects of automobiles, whereas their advantages can be maximized.